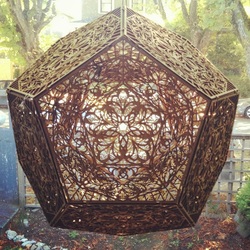 Sacred Geometry, and the Harmonies of our Once and Future World

Nature is composed of beautiful harmonies of proportion.  The forms of flowers, honeycombs, seashells, and spiraling sunflowers speak of this. Artist Ari Lazer has devoted his practice to the exploration of the natural forms of the world - using the traditional tools of the geometer - the straightedge and the compass to create artworks that mirror the essential creative processes of nature.  Ari's fascination is in the meeting of the wisdom of art, and the knowledge of science.


Join us on this evening as Ari shares with us the fundamental principles of sacred geometry, and how those ideas have inspired him as a visual artist - to create interactive geometric spaces, wooden works etched with the rays of the sun, and complex lanterns designed by hand, but cut with laser beams.  Ari will be sharing his latest body of work as it is emerging, and give us each some rich morsels by which to understand the world around us a little more deeply.


Ari Lazer is an artist, educator and healer, based in Vancouver.  He is the former Artistic Producer of the Illuminares Lantern Festival and the Parade of Lost Souls, and has presented work in conjunction with the Vancouver Art Gallery, the Chicago Cultural Centre, the Vancouver International Folk Festival, the City of Richmond, and many others. 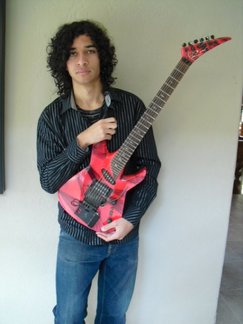 
Keston is back again to dazzle us with his newest jazz-fusion shredding compositions. He has has been playing the guitar since since he was 7 years old and has won the Vancouver Guitar Show Shred competition 4 times! 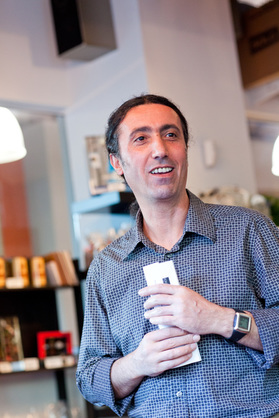 July 5th, 2015
Paul Dincer is the owner and founder of Koko Monk Chocoaltes, Kitsilano’s
newest chocolate shop located at 1849 West 1st Avenue. Paul has quickly
become one of Vancouver’s leading chocolatiers and is known for his
one-of-a-kind chocolate creations. His inspiration comes from his
comprehensive background and education in fine art, literature and
philosophy. Paul is a published author and previous film critic.

In his new path, Paul instinctively discovered an interesting analogy
between words and flavors which eventually lead him to create an
unexpected and very original approach to chocolate making through
literary, philosophical and avant-garde art theories. In his salon, you will discover how these theories have inspired
such edible marvels.

Paul considers his approach theoretically parallel with postmodern
theories which allows him to elevate food from the realm of a consumable,
one-dimensional product to an intellectual and artistic endeavour such as
a cubist poem, an elegant Haiku, or an abstract expressionist painting.

Koko Monk Chocolates was a finalist in Vancouver’s Westside Business
Awards for New Business of the Year. 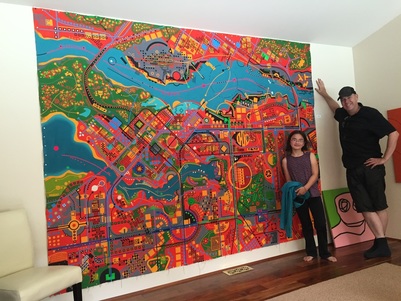 Robert Naish
might be the biggest kept secret in the Vancouver art scene or at least his latest painting could be. Metropolis (2015) is grand vision of Vancouver like it has never been seen before. With his signature style of using found objects as stencils and spraying brilliant, vibrant colours on top to create intricate designs, Naish has turned his eye to the city he loves. Naish is an autodidact artist whose body of work is profound in scope and his ideas as big as his canvases. He uses the discarded items of the city to comment on the biggest social movement of our time: Urbanization. Metropolis (2015) is the latest from his life’s work, The Dynamics of Urbanization, a series of 36 large paintings that chronicle the nature of how humans create the world in which they live.

The evening will feature Metropolis (2015) along with 2 other canvases from the Dynamics series with an introduction to his art and stories by his long time friend, writer, Patrick McGuire.

Robert left Vancouver almost a decade ago so and now, with Metropolis (2015) he is bringing his vision of the city back home to kick off the Vancouver Arts Colloquium Society’s Art in the Garden event on July 19th. 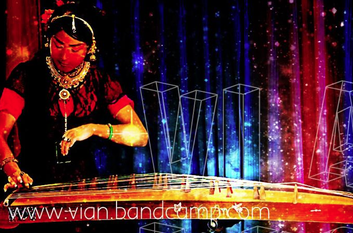 Be true to yourself and compromise not your passions, if you devote your life to beauty and peace then the universe grants you endless wishes.


Allow me to share with you my journey of discoveries through musical demonstrations on the Chinese long-plucked zither and personal stories of self-empowerment and community! 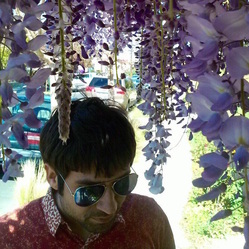 _September 4th, 2015
Nick Herman is a musician. He has played guitar for 15 years, starting with the classical guitar, moving on to flamenco, and finally reaching the vast seas of jazz.  He has also played in an Indonesian Gamelan and listens to plenty of classical Indian music. At the same time, he takes great inspiration from various electronic music, from the minimal ambient to frenetic techno. Using instruments, recorded sounds, software, and synthesizers, he attempts to create music that finds the right balance between structure and improvisation, and best expresses the moment. He is also a passionate devotee of aikido, tea, writing, and travel. He works as a math/science teacher, is a volunteer aikido instructor, and hopes to one day flee the San Francisco Bay Area for a secluded British Columbian island.

Here is the recap of Nick's performance:
https://www.youtube.com/watch?v=5EA6o6ix1Cc

To taste his music: https://soundcloud.com/chaosnick