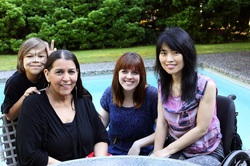 
"Weaving Together a History"

Debra will share her own stories, experiences, and insights: how she achieved, worldwide success as an artist, prosperity, integrity, contentment, self-love and all of her dreams coming true. 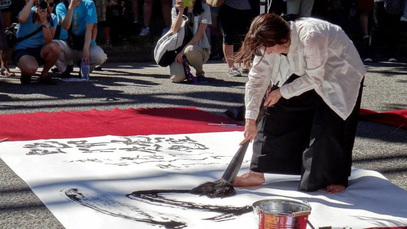 Etsu was born and raised in Fukuoka, Japan. She began studying traditional Japanese monochrome brushwork at age of eight. In high school she began studying with a famous calligrapher and continues till today.

She moved to Vancouver 1989. She has been working to spread the art of Japanese calligraphy and Japanese watercolour painting in Canada.

About her painting, Naturally gifted in arts, She also became aware of her extraordinary love for painting at an early age. At one point, She was interested in both Japanese black ink painting and Japanese traditional style watercolour painting. The combined influence of these two led her to create her own painting style. In her paintings, often the expression of the Japanese elements is predominant, because of She uses of Washi paper, black ink and mineral water colours. Having others feel relaxed and at peace through her artwork brings much joy and fulfillment to Etsu.

Recently She paint modern motif based on looking like Japanese antique folding screen style. Moreover, there is also a work drawn only in Japanese black ink in a wall, a ceiling and so on.

Last year She began collaborating with musicians. In her performances, She expresses how the music makes her feel in the moment. 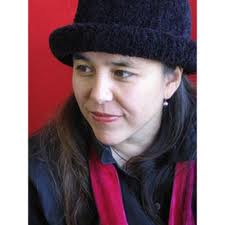 immediacy of life in the Japanese internment camps set up by

the Canadian and American governments during the Second

recount the quotidian details of everyday existence and

reveal the raw wound of this experience.

Letters from social worker Margaret Sage, who worked in the internment

camp of Tashme, just outside of the town of Hope, provide

of Japanese Americans being interned, only recently released by

the US government, offer a startling glimpse across the border.

“The fragmented, shifting form of lived experience and real

history is given cinematic language in Massie’s elegiac and emotional

fi lm. Many of the people who lived in the camps are now

in their 80s, and their stories are a legacy of cultural and family

history that is carefully captured and preserved in this beautiful 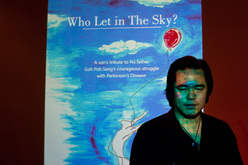 SCREENING OF THE VIDEOS

Air Series­__ presents a special screening of a video of a multi-media spoken word performance by author, poet and filmmaker Kagan Goh’s book launch of Who Let In the Sky? incorporating documentary film, music, video and dance.  This event also features a screening of a documentary film by director Almerinda Travossos entitled Goh Poh Seng: A Poet in Newfoundland; a special dance performance by PataSola Butoh dancer/choreographer Maria Salome Nieto.

Who Let In the Sky?  is a family memoir about a son’s relationship with his father, lately Canadian and erstwhile Singaporean “literary pioneer” poet, novelist and playwright, Goh Poh Seng, who struggled with Parkinson’s disease during the last 15 years of his life until his untimely death in 2010.  Kagan Goh pays tribute to his father’s courage, his lust for life and sheer will to survive against all odds.  Goh Poh Seng, even in the face of death, was indeed a man drunk on the rage of being alive.

“Kagan Goh’s intimate memoir avoids the merely sentimental and movingly speaks to us universally about human relationships we recognize here – ambivalent love between son and father; love between husband and wife, a life time of love palpably captured in a moment of dance, despite the gritty reality of life’s tribulations.”

Copies of the book Who Let In the Sky? will be on sale for $20 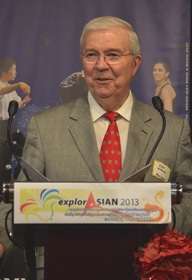 Confucianism, Taoism, Buddhism and Bamboo Network business practices have received much attention in the west, but most of us are not so familiar with traditional and modern Chinese wit and humour. One of the oldest verses in the history of Chinese poetry is a great example of satirical humour, and through the poetry of each succeeding dynasty we find not only pearls of wisdom and enlightenment, but gems of wit and humour as well.  This presentation will offer several poetic examples to illustrate how Chinese people make each other laugh.

Jan Walls taught Chinese language, literature, and communication at UBC, UVic, and SFU from 1970 to 2006.  He is now Professor Emeritus in Humanities at SFU, where he was founding director of the David Lam Centre for International Communication and the Asia-Canada Program.

a special screening of the video of

the Misfit Lit Magazine Launch of

“Samsara is defined as the ‘round of rebirth’ or ‘perpetual wandering’, the sea of life ever restlessly heaving up and down, the symbol of this continuous process of ever again and again being born, growing old, suffering and dying.”

SURVIVNG SAMSARA recounts the author Kagan Goh’s struggles with manic depression.  This story takes place over two decades as he struggles to survive the highs of mania and the lows of depression, tossed up and down upon the restless seas of Samsara.  As a survivor, Kagan gives us insight into an ‘insider’s’ experience of madness as he wanders through his personal Dark Night of the Soul.  He exposes the damaging effects of the stigma of mental illness, and explores manic depression not only as a disorder, but as a spiritual emergence -- a vehicle for personal growth, healing and spiritual transcendence.  Kagan’s deeply personal stories illustrate his transformation from victim to survivor to activist

Kagan Goh is an award-winning documentary filmmaker, published author, spoken word poet, journalist and mental health activist.  Kagan was diagnosed with manic depression at 23 in 1993 on Valentine’s Day.  He started writing about his experiences about living with a mental illness and became involved in Vancouver’s literary community.  He is an established spoken word poet who has performed at open mics, readings, festivals and radio.  His personal mission is to educate people about mental health issues and fight the stigma against the mentally ill.

Maria Salome Nieto is a professional dancer, choreographer and dance instructor based out of Vancouver, BC. She was born and raised in Mexico City where she received her early dance training in ballet and modern dance and graduated from the National Institute for Fine Arts in 1984.  In 1993 Salome began training in modern dance and Butoh with Barbara Bourget and Jay Hirabayashi, founders of Kokoro Dance and has danced in the company since.  Salome is currently exploring how the depth and the scope of her culture, her personal history and her past experience as both a contemporary and Butoh dancer meet and integrate.  Salome Nieto is the founder of pataSola dance, a Butoh company that bases its work on the marvelous reality of Latin America.

Nicholas Epperson is an accomplished cellist and composer.  He studied music at the Vancouver Academy of Music, Simon Fraser University and the University of British Columbia.  He has worked at Ye Olde Music Scoo’ on Granville Island.  He resides in Vancouver, BC.

Fraser Mackenzie is a local singer-songwriter who has recorded and toured with Thurston 5, Thurston Revival and The Blue Alarm. He is involved with the Arts at large and continues to paint, write and record music. Fraser is currently employed by Coast Mental Health. Fraser is also an active member of the BC Mood Disorders Association and is a founding member of The Kaleidoscope, a peer-support initiative at UBC for students/faculty/community members helping to provide resources and support for those challenged with mental health and addiction issues. It is with great pleasure that Fraser takes part in this evening’s explorations.

Misfit Lit Magazine is proud to feature Kagan Goh as its profile author of Issue 2.2.

Copies of Misfit Lit Magazine will be on sale for $10

A musical collaboration between shakuhachi master, Alcvin Ryuzen Ramos, and composer/multi-instrumentalist Greg Valou. Join us for a musical evening of exotic flavours as Greg and Alcvin take you on a journey to new sonic space-time continuums!

Alcvin is one of the foremost teachers and performers of shakuhachi in North America. He has taught and performed all over North America, Europe, and Japan and pursues an active solo as well as collaborative career and has shared the stage with many distinguished artists such as Bill Laswell, Toshinori Kondo, Hun Huur Tuu Mongolian Throat Singers, Kazutoki Umezu, Celso Machado, Giorgio Magnanensi, Joseph "Pepe" Danza, Kiyoshi Nagata and Nagata Shachu, Uzume Taiko, Ma Jie, Mariano Gonzales, and has opened for Anoushka Shankar and the Yoshida Brothers. Recent bands he has played in: Dharmakasa, Isshin Denshin, Densabi, Maru, Grooved Whale Project, and Haagen. A composer and multi-instrumentalist, Ramos explores playing with different musical traditions from around the world as well as new ways of playing traditional instruments and combining them with synthesized and electronic music.

Alcvin is also a craftsman who produces finely crafted jinashi (hocchiku) zen flutes. Every few years, he takes shakuhachi students to Japan where they harvest bamboo for making shakuhachi and to visit sacred places around the country in order to deepen their understanding of the instrument.

Alcvin lives in on the Sunshine Coast of British Columbia, Canada with his wife, ceramics artist, Sandra Ramos, where he has his studio, Bamboo-In.

Greg Valou is a composer, producer, and multi-instrumentalist who collects and plays rare and obscure instruments from around the world. From his early roots in prog-rock psychedelia to immersions in Middle-Eastern jazz, devotional yoga chanting and African dance music, Greg has a passion for musical fusion. He plays in many Vancouver-based multicultural music projects including Zimbamoto, Naad, Tarab, Midnight Mangoes among others. When not making music, Greg works for a major bureaucracy and is a freelance writer. www.dronelove.com 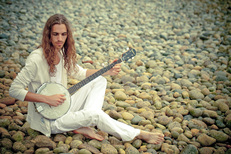